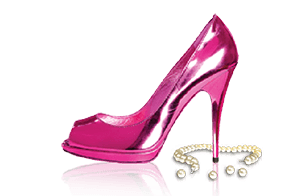 Evie on the other hand has had to work her own way up life's greasy pole - literally!

But, having hooked herself an indulgent sugar daddy, Evie has been able to give up her pole-dancing career, abandoning New York's seedy strip bars for a luxury Manhattan penthouse. Both Lola and Evie are about to meet their nemesis. Overnight, Lola's credit cards are refused, her fiance disappears and she finds herself locked out of her own Chelsea mews house.

That same day, Evie is abruptly thrown out onto the streets. One woman lies behind their misfortune. With Lola's father lying helpless in a coma, her icy stepmother has seized control of the purse strings - and cut off her spoiled stepdaughter without a penny. The same stepmother who happens to be married to Evie's sugar daddy. Although the two girls loathe one another on sight, Lola and Evie must team up if they are to defeat their common enemy: the Ice Queen herself.

"I laughed, I cried. I very nearly choked. Just brilliant. This has to be the holiday read of the year. Rebecca Chance's debut will bring colour to your cheeks even if the credit crunch means you're reading it in Bognor rather than the Balearics"
Chris Manby

"A bright new star in blockbusters - Rebecca Chance's DIVAS sizzles with glamour, romance and revenge. Unputdownable. A glittering page-turner, this debut had me hooked from the first page"
Louise Bagshawe